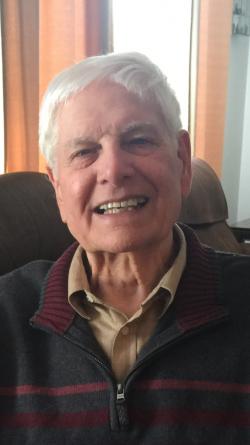 Masterson, Michael – It is with sorrow that the family announce the sudden passing of Michael on September 20, 2020 in Elliot Lake. Pre-deceased by his loving wife Elizabeth, he is survived by his children Susan Masterson-Houle (Fern) and Victoria Masterson-Pinedo (Alex). Dear grandfather of Elizabeth, late Nora and Phoebe Masterson-Houle (Jake Kelly), Sophia and Amelia Masterson-Pinedo and great grandfather of Nolan and Nora. He is also survived by his siblings in England, Shirley Pinchbeck (late Don), John (Gwen), late Frank (late Pat), Sue Smythe (late Rex) and numerous nephews and nieces. Out of respect for Michael’s wishes, cremation has taken place and a private service will be held at a later date.

Condolences for the lost of Michael Masterson, a lovely uncle, always so kind and caring to his sister Shirley. He will be missed by all the family.

Condolences to Victoria and Sue. I remember him as a strong, gentle man who was patient and kind..even when we were teenagers.

Leave a Condolence for Michael