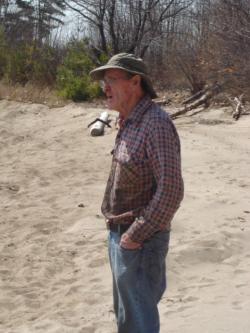 In many ways, Jim Ryan’s story is the story of Elliot Lake. Jim was one of the original prospectors who staked mining claims along the “Big Z” uranium deposit. In the summer of 1953, in his hometown of Timmins, at age 19, Jim was offered a job to be part of what was later dubbed the “Backdoor Staking Bee”. Jim was told he would be away for two weeks and all he needed to bring was a pair of rubber boots and an extra pair of socks. The seaplane took off from Timmins and landed on a remote, picturesque lake in the wilderness called “Elliot Lake”. Jim and a handful of other men were deposited on an island across from what is now the Spruce Avenue Municipal Beach.

Six months later Jim was still in the bush. It would soon be Christmas and Jim wanted to go home. With the ice being too thin for an airplane to land and no built roads at the time, Jim and two of his companions decided to walk out by cutting through the thick brush all the way to Highway 17. Jim later returned to the job and, for the next two years, he lived in a tent and staked claims around the area. “Ryan Lake”, next to Stone Ridge golf course, is named after Jim.. Today, Jim’s name appears on the Prospector’s Monument overlooking Horne Lake. Jim was honoured to be invited to the unveiling last summer, as the last surviving prospector.

In 1955, Jim married his sweetheart, Joan Carpenter, in Timmins. After a short time in Blind River, they moved into one of the newly constructed mine houses on Poplar Road in Elliot Lake where they raised a family. The early days in Elliot Lake were filled with the fun and excitement of being young, and with other young people, building a brand new town from scratch. Jim and Joan played an active part. On movie nights, Jim operated the film projector in the old Alcan Theatre. He watered the outdoor skating rinks and helped raise money with the Arena Fund Committee. He was one of the volunteers who rolled up his sleeves and built the Centennial Arena. He then served for many years on the Recreation Committee. Jim was also a devoted, involved and active father and later, grandfather.

Jim worked at Quirke, Panel and Nordic mines. Assigned to the geology department at Quirke, he was placed in charge of the mine water program. Jim retired from Rio Algom in 1992, and he and Joan set about building their dream home on a piece of rock overlooking the North Channel. Jim and a crew of friends spent a happy spring and summer together in 1994 constructing “Ryan’s Rock”. Each day, Joan drove from town to the work site with a delicious home-cooked supper. And, after a long work day, Jim and the crew would sit out with their picnic boxes and soak up the view. By Christmas, Jim and Joan had moved in, and Jim finished the inside of the house himself -- under Joan’s careful supervision. Jim and Joan’s house on the rock became the happy vacation destination for their kids and grandkids. for the next 27 years.

Jim loved the outdoors. He fished and hunted during his early Elliot Lake years. After retiring, he continued to run his trap line until he was 87 years old. With his friend , Ernie Tiessen, he was often called in to remove nuisance beavers from around the mine tailings ponds. Any money Jim earned from trapping, he put aside to help with his grandchildren’s education.

Jim was a hard-working, generous, and gentle man. He always had a twinkle in his eye, a witty comeback, and a kind word. He never complained. He loved his life. He cared for the people in his life, and he could always be counted on to pitch in and lend a hand to neighbours, friends, and extended family.

“Grampa can fix anything”, the grandkids would say. And he could - whether the job required plumbing, electrical work, or carpentry. Jim was a master of improvising solutions - from setting a chain block to remove huge boulders, to showing the local volunteer fire department how to pump water from Lake Huron to put out a fire at his neighbour’s garage, to “taking out” fallen trees on other peoples’ properties with one of his trusty chain saws. He would never accept anything in return. (But he wouldn’t turn down butter tarts, which he would promptly stash in the freezer with his beaver pelts so his kids wouldn’t find them when they visited.)

Friends will be received at the Elliot Lake Funeral Chapel & Cremation Centre (36 Ontario Ave) on Monday August 1 from 7-9 pm. Funeral mass will be celebrated on Tuesday August 2, 2022 at 11 am from Ste. Bernadette’s Parish (45 Spruce Ave). Father Eric Pannike officiating. A luncheon at the Hampton Inn, Maple Room to follow the service. In lieu of flowers, donations can be made to St Joseph’s Foundation of Elliot Lake.

Very sorry to hear about Jim. I remember the days of being babysat by Jim and Joan and all the times spent at the house on the lake. They were both wonderful people and we were lucky to have them as part of our childhood. He will be missed.

A full life and a beautiful obituary, a rock of the North Shore.

Great family and lots of good memories growing up in Elliot Lake with them.

Jim was a mentor to me in my early years in the geology department at Quirke II mine. He had a great sense of humor and was always willing to share stories of the early years in Elliot Lake. I had the opportunity to spend a day on the trap line with him, an experience I still remember. A great co-worker and a great guy, one of the memorable ones, he will be missed.

Jim was always a welcome presence, both underground and at surface at Quirke l mine, and in the geology department where I was privileged to have worked in for a few years. Jim was quick with a smile and engaging in conversation. He had a dynamic personality that could light up a room and lift the spirit of those inside.
Condolences to the family.
May He rest in peace.

We are very sorry to hear of the loss of Jim. Jim and Joan were great neighbors on Poplar Rd., always willing to lend a friendly hand with our young Family. What a wonderful story you have written. A life well lived.

Jim was a great man and a vital part of Elliot Lake. I worked the bingos on Monday’s at the Collins Hall with him and went to school with Jody. A true pioneer. RIP

Humble but proud. Giving always, encouragement, love, support, information. The world shall not see the likes of Jim Ryan again.
Take a moment everyone, give thanks for this man amongst us, who walked the talk, and was ever so gracious in doing so.
Thoughts and prayers for his family. Rest In Peace my friend, for you have surely earned it. ❤️

Dear Kelly, Ian and all your family,
I am sorry to hear about the loss of your dad. He was blessed to have lived a beautiful long life and I believe he will always be remembered by you and this community. I am thinking of you all at this difficult time. Love, Arlene

Jim was a great man. I lived 2 doors from Jim on Poplar Rd. EL was populated with young and rambunctious kids. Jim was a tolerant man. I remember the smell of sawdust. (He was good with woodwork). Ran into him not long ago, he still had his wits and knowledge and was active in EL community still.

I am so sorry for the passing of your dad Jim.
What a wonderful man he was.. God Bless.

My deepest sympathies to the Ryan family. Jim was an extraordinary individual, so kind, intelligent, always willing to get involved and help anyone. He was definitely one of the original forefathers of Elliot Lake!
I worked a short time U/G with him and always remember his saying “I’ve done so much with so little, I can practically do anything with nothing” which he could.
May you Rest In Peace Jim

Leave a Condolence for James Edward