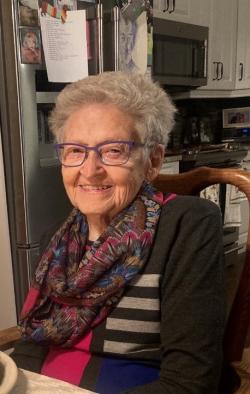 It is with heavy hearts that we announce the passing of Cora Annesley in her 90th year on Thursday October 14th, 2021 in North Bay, Ontario.
Loving wife of Irv Annesley (pre-deceased) and devoted mother of Janet Venne (David), Susan Lamont (David), and Patti Guzzo (David). Cherished grandmother of Stephanie Venne (Heather White), Michael Venne, Katlyn Lamont, Emily, and Joshua Guzzo.
Born in the Eastern Townships of Quebec, Cora attended school in Kinnear’s Mills and Thetford Mines. Cora’s first job after business school was as a secretary for CJM mine in Asbestos, Que. After a time there, she married Irv (1954) and in August of 1956 the two moved to Elliot Lake where she was hired by Rio Algom to work in the office at Nordic Mine. As life moved on her career did too, working for W. Brown Law firm in Elliot Lake and ending her illustrious work life as a real estate agent for Remax

Cora and Irv were longtime residents of Elliot Lake, ON. As a couple, they travelled coast to coast to coast, but their fondest memories were of their time together at home, at their cottage on Lake Lauzon and fishing on Little Quirke.

In honour of our mother and grandmother, a graveside service will be held on November 6 at 1:00 pm at Woodside Cemetery in Elliot Lake. In lieu of flowers a donation to St Joseph’s hospital in Elliot Lake would be greatly appreciated.
Unfortunately, due to Covid restrictions there will be no reception.

Together again, Rest in Peace.

My deepest condolences to all the family of Cora, may she Rest In Peace

Worked with your father and knew your mother very well. My mother was also from Thetford Mines so we often had chats of that area. So happy to have know your parents always a joy to be around. Our deepest sympathy.

Leave a Condolence for Cora