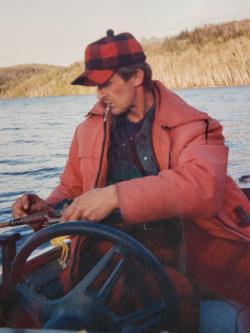 It is with great sadness that we announce the passing of Robert Joseph “Joe” Hukezalie at St. Joseph’s General Hospital Elliot Lake in his 69th year on May 29, 2021.
Joe was born in Kirkland Lake Dec 3, 1952, then at the age of 5 he moved with his parents Mary Ellen (nee Larocque), Joseph Hukezalie Sr. (both deceased) and three siblings Mary Loretta, Michael and Walter.

Joe worked for Rio Algom Mines until closing and then continued to work as a welder in the oil sands north of Fort McMurray, Alberta. Recently Joe was working in Sault Ste Marie at the steel mill continuing as a welder.
Robert as he preferred to be called later in life attended E.L.S.S. and was an active member of the track and field team. He also attended Lake State University in Sault Ste Marie Michigan and graduated with a Degree in Finance.

Joe as the family preferred to call him was an avid fisherman and hunter in the area surrounding Elliot Lake. He shared the adventure of fishing and hunting with his family and friends. Warm memories of this time will be held by all. During the summer months you would see him cruising in his green machine, his Camaro.
He will be sadly missed by his children, Adam Hukezalie (Amanda) Sault Ste Marie, Tanner Hukezalie (Kara) Toronto, and Elyse Hukezalie Sault Ste Marie. He was predeceased by his son Taylor Hukezalie. Joe is survived by his Grandchildren Cohen, Isla, and Olive. His siblings Loretta Harrison (Robert), Michael Hukezalie (Barbara), Walter Hukezalie (Patricia), Bernadette Robertson (Robert), and Joan Hukezalie (Bruce). He will also be missed by his Uncle/Godfather John Larocque and his Aunt Iris Hukezalie. His many nieces, nephews, cousins and friends will sadly miss him as well.

According to Robert’s wishes cremation has taken place and a celebration of life to take place at a date to be determined due to Covid restrictions. In lieu of flowers, donations to the Canadian Diabetes Association in Joe's memory would be greatly appreciated by the family.

My condolences to the Hukezalie family. Joe was a great friend through our years at ELSS.

Leave a Condolence for Robert