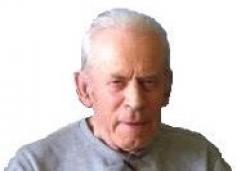 It is with great sadness that the family announces the passing of Julien Gérard (Gerry) Gauthier on Wednesday October 7, 2020 at the St. Joseph’s General Hospital in Elliot Lake at the age of 85 years.
A 20 year veteran of the Royal Canadian Air Force who served mostly in Germany. He worked as a Air Traffic Control Operator, while obtaining his pilot license for private planes and gliders. He also was an instructor for both. Son of the late Raoul Gauthier and of the late Thérèse (née Lortie) Gauthier.
He will be missed by his long-time friend from their church, Françoise (Fran) Mascarin and her daughter Jenny. Dear brother of Rachel (predeceased), Noëlla Potvin (Roland predeceased), Philippe (Eileen McCarron) both predeceased, Marie-Jeanne Côté (Jean-Claude), Pauline (predeceased), Maurice predeceased (Bernice Mousseau), Raymond (Kiziah Davis), Françoise Savard (Hector), Richard, Berthe Gauthier (Yves St-Pierre), Gaëtane Dionne (Denis), Rolande Melong (Norman). Cherished uncle of many nieces and nephews.
His family wishes to thank the staff at the hospital for their kind and compassionate care. Due to the pandemic restrictions, a private internment of ashes service will take place at the Woodlands Cemetery in Elliot Lake.

My sincere sympathy to my cousins and family further to the
passing of their brother. My prayers are with you.