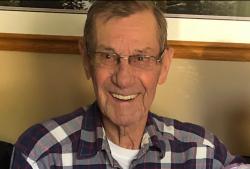 Jack was the adoring husband of Gilberte (nee Laferriere), whom recently celebrated 60 years of marriage, and father to Lizz (David) Cross and the late Eddy (Sarah) Carroll. Papa Jack will be fondly remembered by his grandchildren Tanya, Melissa (April), Jennifer (Jamie), Ryan (Shannon), Tyson (Julie) and his great-grandchildren Angus, Levi, Aster, Eliza and Travis. He will be sadly missed by his extended family and friends.
Born in Chapleau, Ontario, Jack was a born and bred Northern Ontarian. His career brought him from working on the railroads to the mining industry; moving his family to Elliot Lake during the mining boom in the late 1960’s.
Jack adored his family and had a mischievous spirit. As an avid outdoorsman and fisherman he found home in the nature and beauty in the Elliot Lake area.
In his retirement, when he wasn’t fishing, Jack could be found sitting by the lake, at his camp, having coffee with the boys, out on “patrol” or puttering around on his many projects. Jack was a dedicated member of the Quirk Lake Seniors’ Park for over 20 years and spent many hours with his friends enjoying the outdoors and the comradery there.
The family wishes to extend a heartfelt thanks to Rosie and Don Oesch and Beth Harten for all their love and support and friendship through the years.
And with a wink and smirk he would say, “Don’t do anything I wouldn’t do …unless you get the chance.”
A celebration of life will be held at a later date.

In lieu of flowers, donations to One Kids Place (North Bay) in honour of his great-granddaughter ‘Eliza’ would be gratefully appreciated.
One Kids Place - 400 McKeown Ave. North Bay ON P1B 0B2

Leave a Condolence for John